Halifax Transit just released their newest report on their five year network review: Moving Forward Together. Its More Than Buses is recommending that Council reject this report as inadequate, and bring in an international expert to review Moving Forward Together. We continue to advocate for a connective network, a more efficient design that would provide thousands of people riding the bus with faster travel times to more destinations.

We are sharing some maps and analysis that our team members Kyle Miller and Paul Dec have developed. The analysis shows two things:

Several months ago, Its More than Buses sent Halifax Transit proposed route changes that would create more crosstown travel options (e.g. routes that don’t run just to downtown Halifax or Dartmouth). These changes were based on several amendments that Council proposed to Moving Forward Together. Our proposed routing would – with a transfer – provide more access to Mulgrave Park, Downtown Dartmouth, the Irving Shipyard, the Naval Dockyard and Woodside. It would also reduce the number of buses that overlap on Spring Garden Rd., Barrington St., and Gottingen St. The extreme number of buses on these streets is a long-standing problem, resulting in noise and diesel fumes.

Here’s what we proposed, as mapped below: 1) Run Routes #8 and #9 straight across the Halifax peninsula; and 2) terminate Route #3 at Bridge Terminal and extend Route #6 from Bridge Terminal north into Dartmouth. Note: we only mapped the corridor routes for this exercise. Kyle and Paul are brilliant at mapping, but don’t have the time to map and analyze the entire Moving Forward network, which has dozens of routes. 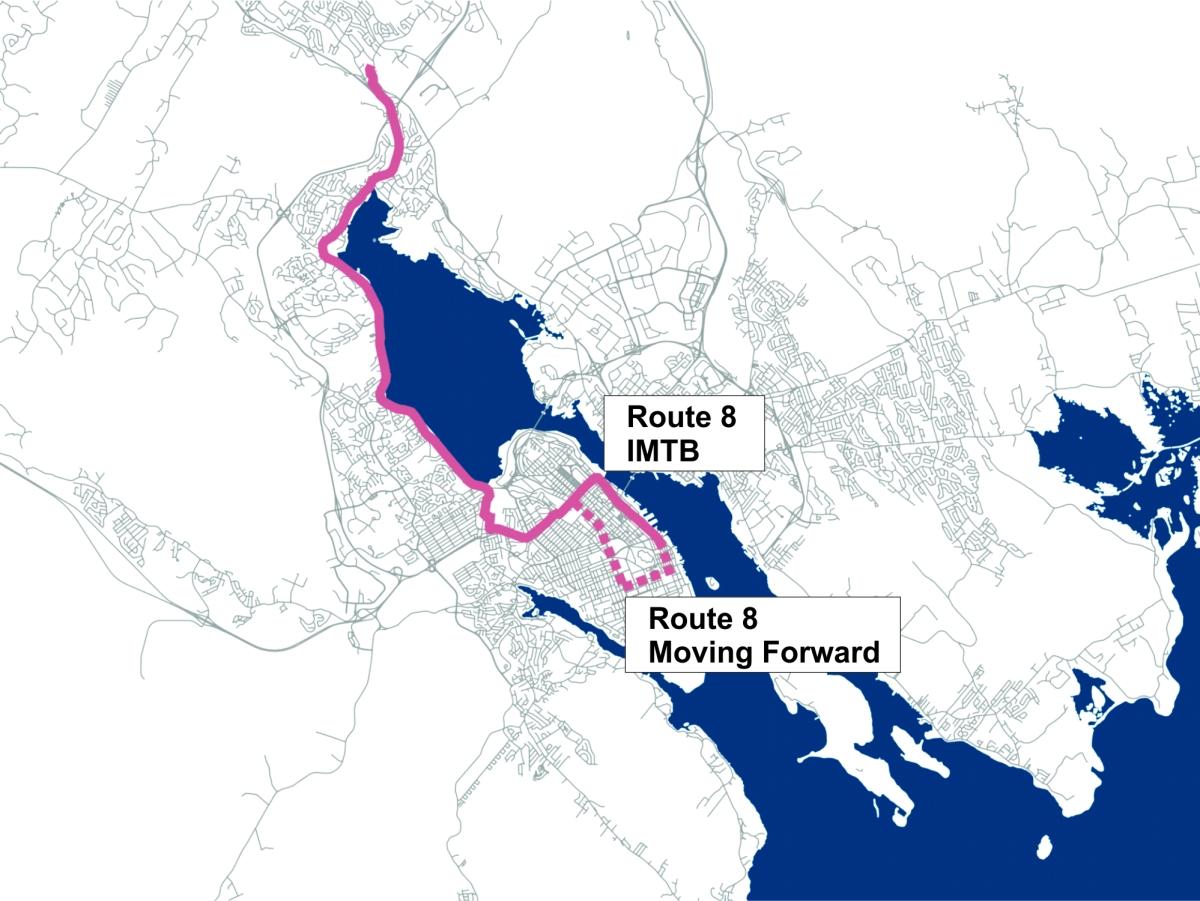 Proposed changes to corridor route 8. Solid line is proposed by Its More Than Buses, with dashed line as proposed in Moving Forward Together.

Proposed changes to corridor route 9. Solid line is proposed by Its More than Buses, with dashed line as proposed in Moving Forward Together.

Proposed changes to Corridor Route 3. Solid line is proposed by Its More than Buses, which terminates the route at Bridge Terminal. The dashed line shows the route continuing north into Dartmouth from Bridge Terminal, as per Moving Forward.

All 10 corridor routes, as proposed by Its More than Buses. Note, there are several overlapping routes that are difficult to show. The branches on routes are not shown. All maps above: Kyle Miller.

So, there are two proposals. Which one lets more people get to important locations,easily? Which one helps different neighbourhoods? Paul and Kyle used two independent methods to try and answer those questions, but their methods produced similar responses that supported each other. For example, Paul found that people riding the Route 8 from Bedford would reach Scotia Square 4 minutes quicker under our proposal, but they would reach the corner of Robie and Spring Garden 4 minutes slower (with our proposal they would need to transfer to get to Robie). These are both important destinations, so we called it a draw. But, our proposal also lets people riding the Route 8 get to the naval dockyard and Irving Shipyard much faster than the corridor routes of Moving Forward. Residents near the Hydrostone and Mulgrave Park would also gain access to a corridor route, providing solid all day and evening service. Sounds like a win for Its More than Buses.

Writing out the travel time differences for each location we looked at would take a big spreadsheet (like the one Paul produced!). A better way to show that data is to create maps that show how far, with a short walk and a transfer, people could travel by transit, starting at different locations in a city. This is the method that international consultant Jarrett Walker uses to communicate how a new network will change where people can travel. Walker describes his work as “leading cities and transit agencies through public processes where the outcomes produces by transit networks based on different choices are explicitly compared.” We need that kind of comparison in the Halifax region. Halifax Transit has chosen to run many corridor routes and many peak-hour routes to Downtown Halifax. This means they have chosen lower frequency on those routes, fewer connections and less access to many destinations. That is an enormous trade-off that Halifax Transit has not made explicit. Another way to put it: with different choices, our network could provide way more service, to more destinations, with the same resources.

Here is what we found, mapped below. We compared our network ideas (described above) with the Moving Forward Network.

Projected travel time to and from Scotia Square, using corridor routes, for the Moving Forward Plan.

Projected travel time to and from Scotia Square, using corridor routes, for Its More than Buses proposal. 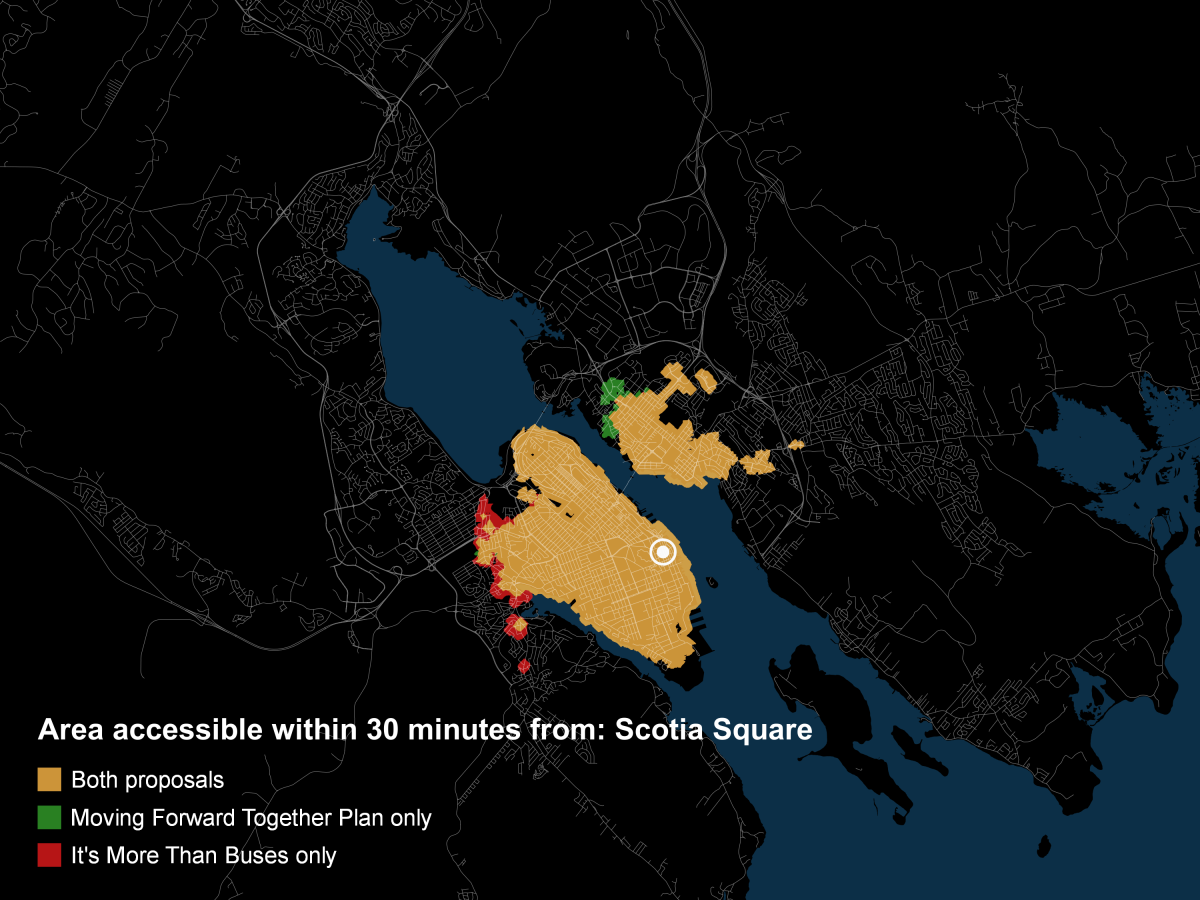 The distance riders could travel from Scotia Square in half an hour, compared for both Moving Forward Together and Its More than Buses.

Projected travel time to and from the Irving Shipyard, using corridor routes, for the Moving Forward Plan.

Projected travel time to and from Scotia Square, using corridor routes, for Its More than Buses proposal.

The distance riders could travel from the Irving Shipyard in half an hour, compared for both Moving Forward Together and Its More than Buses.

Projected travel time to and from Alderney Landing, using corridor routes, for Moving Forward Together.

So what conclusions can we draw from these maps? Our proposed Route 8 is dramatically superior – a huge area of Fairview and Clayton Park becomes accessible from the Irving Shipyard. Under our changes to the Route 8, fourteen thousand more people would have a half hour or less trip to the north end of Barrington: Mulgrave Park, Irving Shipyard and the Naval Dockyard. That’s impressive, especially considering the tradeoff is just a 4 minute increase in trip time for people busing from Bedford to the south end of Robie Street. Transit design is about tradeoffs, and this one seems pretty good. Halifax Transit’s report does not adequately address these tradeoffs.

Our change to the Route 6 is also a winner, giving over seven thousand more people half hour or less trips to Pleasant Street and Woodside, the location of NSCC, Dartmouth General, Nova Scotia Hospital and the Woodside Ferry. These are all important, all day destinations for lots of people.

We thought ending the Route 3 (Crosstown) at Bridge Terminal would be more than offset by extending the Route 6. The data, however, shows that isn’t the case. While the Route 6 extension is a good idea, it doesn’t nearly make up for the loss of access from cutting the Route 3. Kyle’s map below shows the problem pretty clearly. The Its More than Buses (IMTB) proposal means over twenty-one thousand fewer people can get to North End Darmouth in half an hour. That’s a poor adjustment.

A few final thoughts. The travel time mapping helps us understand what areas gain and lose from different travel choices. It shows what destinations can be easily reached. There are clear limitations to our mapping: we only used corridor routes; and we only mapped important destinations. But, it helps clearly show the tradeoffs involved in transit design.

We kept service levels (e.g. how often the buses come) as proposed by Moving Forward for both proposals, which is a mix of 10 and 15 minute frequencies in rush hour. Our changes were also limited to what we considered to be the “low-hanging fruit” needed to cut overlap and put in place critical cross-towns. With higher frequencies, and more crosstown routes, our connective model would have done even better relative to the Moving Forward option.

Why? Moving Forward uses many buses to do similar things, like running multiple routes down Robie, the Bedford Highway, Portland Street, across the MacDonald Bridge and of course on Barrington, Spring Garden and Robie. Every additional bus on those streets provides very few new travel choices – if you’ve got 6 routes already, is a 7th similar route really that much better? The law of diminishing returns. But, if you move some of those routes from streets with too many routes, to streets with no routes you open up lots of new trip options. When buses come often and people can quickly change between routes – connection! – you open up further travel choices. It’s not about adding more routes or more buses, it’s about putting them in more useful places.

Kyle Miller and Paul Dec, two professional planners and Its More than Buses volunteers, have created the maps and travel time analysis presented in this blog. Our hope is that it shows the public, Mayor and Council just how much stronger analysis is needed to truly understand the massive impacts of a complicated transit network. There are huge negative trade-offs baked into Halifax Transit’s approach – we want Council to understand how much service is available if a connective network. We fully believe that if presented with the facts, the dramatic advantages of a connective network will become obvious. Once again, Its More Than Buses is recommending that Council reject this report as inadequate, and bring in an international expert to review Moving Forward Together. Residents, transit riders and all who pay taxes deserve to see the cost of preserving the status-quo.

One response to “Mapping Travel Choices”