It’s More than Buses was thrilled to host Darren Davis in September. Darren is the principal public transit planner in Auckland, New Zealand. Under his direction, Auckland has completely redrawn their bus network. Early results are promising, with ridership up over 30% in some parts of the network. This type of radical re-design is both rare and incredibly inspiring. Auckland’s audacious transit plans hopefully represent emerging best practices for transit networks everywhere.

Darren’s expertise and direct experience with a complex transit network were a perfect fit for Halifax. We were very excited when he added Halifax to his 2016 North American transit tour (San Francisco, Vancouver, Edmonton to name a few).

A simple point made by Darren, that is often overlooked is just that buses matter. They are the foundation of most transit systems. In Halifax, buses are the major mode of public transit. Almost 100,000 trips are made by bus everyday in Halifax, and the annual transit budget is over $100 million. But, our bus network is not nearly good enough. It operates well below its potential. Dramatically improving our bus system would accomplish so much. A better bus network would:

Good transit clearly has huge benefits, but those benefits only happen if lots of people ride transit. The more people that ride transit, the more Halifax benefits. This is one reason buses, yes boring buses, are so important. Since buses run on existing roads, there are limited upfront costs to creating new bus routes – you need some buses and some stops. The upfront costs of streetcars, light rail or commuter rail is high. Even dense cities with massive subway and rail networks (London, Paris, New York, Berlin, Moscow) can’t afford to build rail everywhere. Buses have a big role to play in big transit networks. Consider this tweet from Jennifer Keesmat, chief planner in Toronto: 60% of all people using transit are on a bus for at least part of their trip. 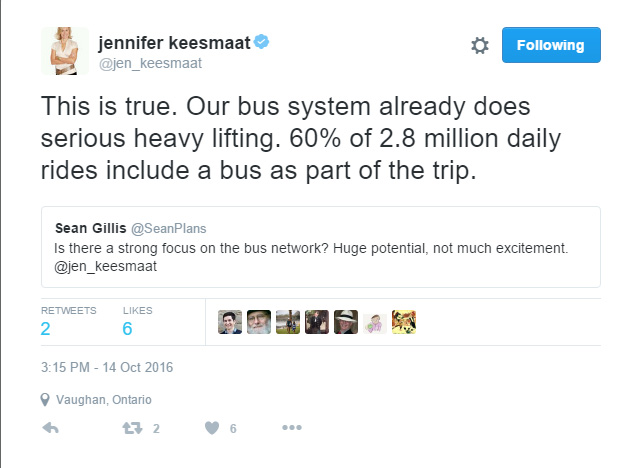 Any city that wants to provide transit service to many neighbourhoods, needs to use buses. Any city that wants to build up transit ridership to a point where rail becomes attractive, needs to use buses. And cities like Halifax – small, moderate density – likely only have a handful of routes where there may be enough people riding transit to even look at rail. Because rail is expensive to build, and often expensive to operate, it is easiest to justify on busy transit corridors, usually where peak transit demand is over two thousand people per hour, per direction.

In Halifax, the MacDonald Bridge meets that threshold, but few other corridors are even close to that busy. Many neighbourhoods have strong transit demand, but not enough demand to look at laying new rail lines: Spryfield; Fairview; Clayton Park West; Sackville and North and Central Dartmouth. In addition, many key destinations aren’t close to the water or rail lines, including: the Halifax Infirmary; the IWK and VG; the naval dockyard and shipyard; Mic Mac Mall; Dartmouth Crossing,  plus NSCC campuses and high schools across the region. These are all places that many people want to travel to, and the bus is the most likely option to serve most trips across HRM for the foreseeable future.

We already have buses, and they already go to all these locations. The problem is that the existing bus service is not good enough. Neither is the service proposed under Halifax Transit’s network redesign, the Moving Forward Plan. Our buses need to be faster, come more frequently and be more reliable. Buses need to quickly and easily connect more people to more destinations. Building a radically better bus system will help people who already use the bus, it will encourage more people to take the bus, and it will build ridership to support other transit projects.

Whatever other transit we need or choose in the future, our city will be much better off with better buses.

One response to “Buses Matter”