Early Wednesday morning, users of Google Transit, Transit 360, and other applications noticed something awesome: live information on their bus location. It seems the long awaited release of Halifax Transit’s real-time data feed has finally occurred, much to the delight of both riders and app developers.

In a press release, Halifax Transit noted it:

is initially launching the data feed to developers as a beta release. During this time, the technology team will be closely monitoring the service to identify and address potential technical issues. Users of the real-time data may experience occasional downtime or possible inaccuracies in data quality until the technology team has resolved any issues that are found. Subsequent communications will be issued once the beta version of the real-time data has been tested in the marketplace, and is deemed to be fully operational.

GTFS, or General-Transit-Feed-Specification, is a universal format for public transit scheduling data. Previously, the GTFS data provided by Halifax Transit was static, meaning that it was not updated on a real-time basis. With the release of the real-time version of the data, riders can access live information about departures, and any potential delays and service disruptions.

Developers can display this data in various ways. Check out Dan Peterson’s use of One Bus Away as a concept for an airport-style departure board: 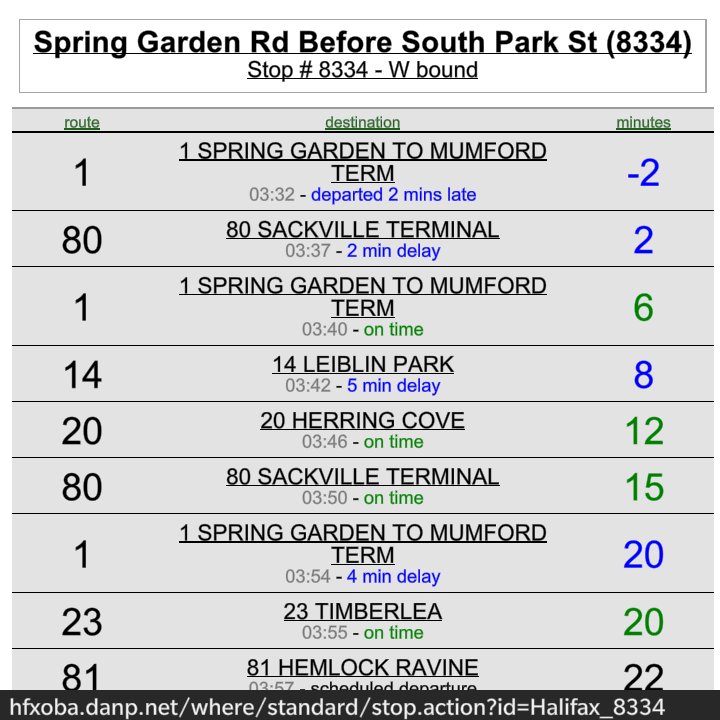 The data is published as part of Halifax’s Open Data catalogue and is available here.